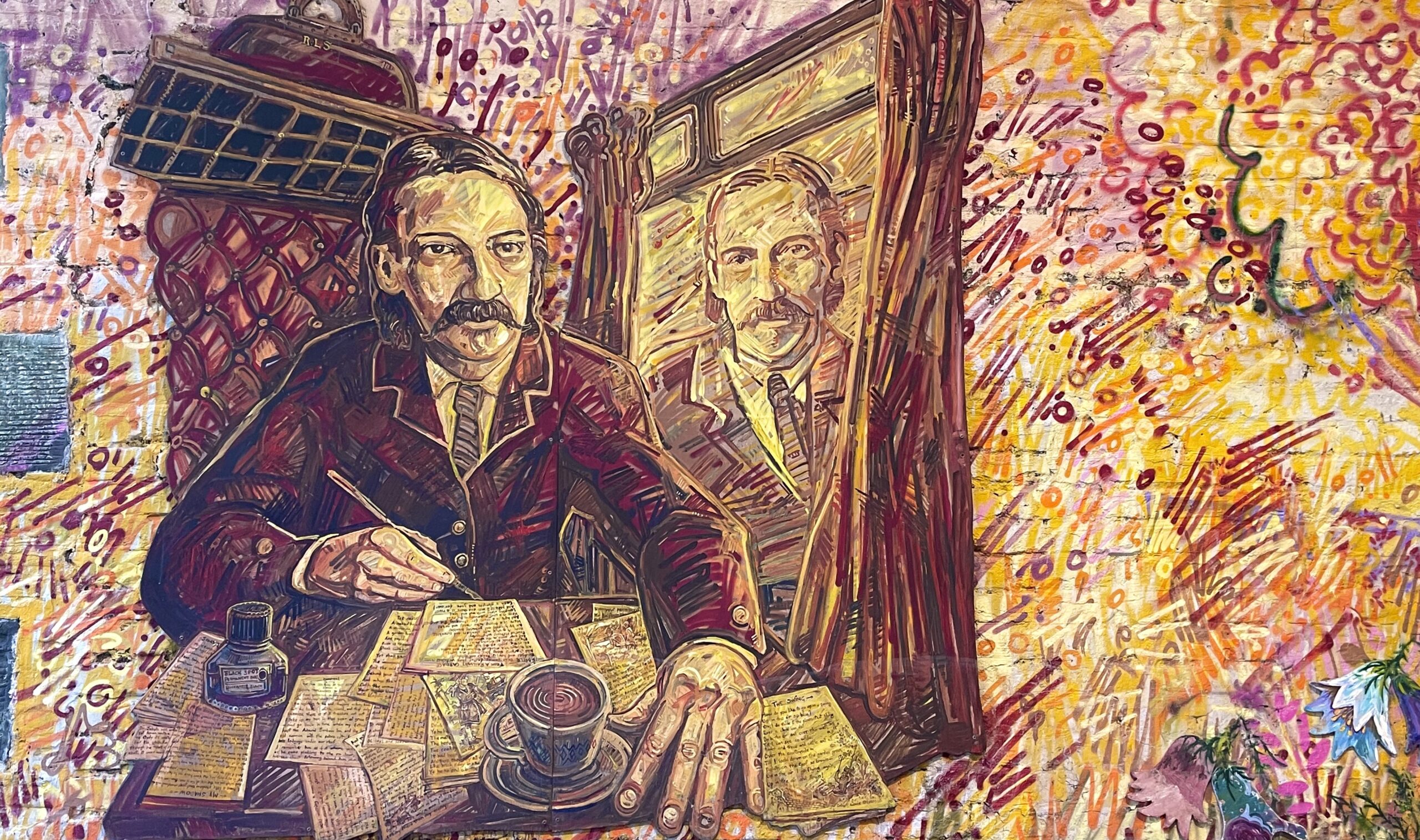 Is it Worth the Trip?

Visitors to Edinburgh will inevitably feel obliged to tick off all of the “must see” places in the Old and New Town.  But what if there was something just that little bit different within a short bus ride? Look no further than Colinton Tunnel & Station that sits close to the Water of Leith. It has been beautifully adorned with murals by a local community group. The nearby village of Colinton has a number of quaint little places for coffee or meals for anyone who needs refreshment.

The hardier and more adventurous visitor could combine this with a walk back into town from Colinton Tunnel following the Water of Leith Walkway. Alternatively, if the walkway proves too circuitous, one could join the Union Canal at the halfway point at Longstone. This would provide a more direct route back to the Fountainbridge area of Edinburgh.

Either way, it makes for a great half day adventure. For directions on how to get there, refer to the last part of this blog.

However, in this blog we want to focus on the Colinton Tunnel, it’s history and why it is worth visiting for the mural alone.

History of the Area

First of all, it might be worth pointing out that the Colinton Tunnel up until the early 1960s still had an active railway line operating through it. In its earliest incarnation, the railway track was known as the Balerno line. This was a branch line coming off the main Caledonian Edinburgh to Carstairs line at Slateford.

In the late 1860s, the Balerno line was strongly supported by the mill owners and farmers who believed it would make the transportation of products and animals easier. Despite objections from landowners, it finally received Royal Assent in 1870.  By 1874 the line was completed at a total cost of £134,000.

The main users of the railway line were the mill owners who manufactured textiles, paper and snuff. Interestingly, at one point there were as many as six snuff mills in the area, believed to be the greatest concentration of snuff mills in the world. In addition, the railway line was used by two stone quarries, a tannery and a salt works. Eventually, the line was also used by Edinburgh based residents seeking an escape from the city. As Balerno and Currie began to expand, residents there began to use the line to commute into the city centre.

Sadly, however, with the advent of bus transportation passengers began to switch their allegiance.

The last train ran on 4th December 1967 and by 1968 the rail track was removed. Stations and any other equipment were also demolished. Thankfully, the original rail route was put to good use and the Water of Leith Walkway was eventually created in 1980. The route begins by Balerno High School and runs for over twelve miles all the way to the docks in Leith. The most attractive part of the route is where it passes through the Dean Village and Stockbridge. But almost any part of the route is pretty and so peaceful.

In the earliest days of the line closure, the Colinton Tunnel was bricked up and remained closed until well into the 1970s. With the creation of the Water of Leith Walkway, the tunnel was reopened. After some restoration and ongoing maintenance a very simple mural showing the Balerno Pug, a steam engine, was added to the tunnel.

Disappointingly over a period of time the tunnel became dirty and worn. As with many remote locations the tunnel became a target for antisocial graffiti. It became an area to avoid particularly after dark.  Added to that, the history of the area was being tainted and the local Colinton village economy was already showing a decline. The tunnel’s time had come and with the right support it was believed that something special could be done with this historic tunnel.

It would be incorrect to say that one man was responsible for restoring the tunnel as this was a truly community effort. Numerous community associations, societies and Trusts were supportive from the beginning and a wide ranging group of organisations  were generously forthcoming with funding.

For any mural to be painted onto the tunnel walls, it was essential that it represented the local and surrounding area. Thanks to the guidance of Mike Scott, the Tunnel Chairman and under the direction of artist Chris Rutterford, they were able to create a visual feast for the eye. The Colinton Tunnel project team came up with the idea of using the imagery from a poem by Robert Louis Stevenson.

As a youngster Stevenson was a frequent visitor to Colinton. His maternal grandfather was the minister for the church in Colinton. It is most likely that he would have travelled to Colinton either on foot from the New Town, or possibly on the back of a wagon or cart.

However, towards the end of his time while studying at Edinburgh University or during the remainder of his time in Scotland, he would have quite likely left from the station at the eastern end of Princes Street. This would have been a far quicker journey.

It would be nice to think that these journeys were the inspiration for the poem that he wrote many years later called “From a Railway Carriage.” It paints such a wonderful picture of the sights and sounds that Stevenson saw as he made his way to Colinton.

I am sure that if he were alive today he would find it hard to believe that the poem he wrote would be so vividly illustrated on the very tunnel that he used to travel through 160 years earlier. Here is the poem. If you read it with the rhythm of a train trundling through the countryside, you can just picture the images that Stevenson was conjuring up.

From a Railway Carriage

Bridges and houses, hedges and ditches,

All through the meadows the horses and cattle,

All of the sights of the hill and the plain

Fly as thick as driving rain,

And ever again, in the wink of an eye,

Here is a child who clambers and scrambles,

All by himself and gathering brambles,

Here is a tramp who stands and gazes,

And there is the green for stringing the daisies!

Here is a cart run away in the road

Lumping along with man and load,

And here is a mill and there is a river,

Each a glimpse and gone forever.

Chris Rutterford was highly enthusiastic for this theme and set to work sketching his initial thoughts. These sketches became the direction of travel when they finally started illustrating the tunnel. As well as the scenes that Stevenson wrote about in his poem, Chris wanted to portray the history of the area. This would include references to the farms along the way, the historic industrial connections located on the Water of Leith and the military connection with nearby Redford Barracks.

In fact, if you look closely at the image with the piper; he is a representation of the Pipe Major at the Army School of Highland Drumming and Bagpipe Music at Redford Barracks. The barracks are only a few hundred metres away from Colinton Village. In the image, for the more sharp eyed amongst you, you will see the regimental badges of the all of the units that have been based there since the barracks opened in 1919.

As one leaves the tunnel at the eastern end as if you were heading to Edinburgh, there is a wonderful mural of the “Balerno Pug.” This was the actual steam engine that would have run on the Balerno Line. The colour of the engine belong to and was the corporate colour of the Caledonian Railway Company which operated this particular route and many of the routes heading out west.

A little know fact about this particular scene is that all of the people on the platform are actual local residents. The exception to this are the three famous World War I poets who are included in the scene; Wilfred Owen and Siegfried Sassoon were being treated for “shell shock,” now known as PTSD at the nearby Craiglockhart War Hospital. This is now a campus belonging to Napier University. The third gentleman is Robert Graves who travelled up from London in 1917. All three of them played golf a the nearby Barberton Golf Club.

If you want to see the entire length of the mural in the tunnel, click on the link below which will take you to the video on our Youtube channel.

How to Get There

I can’t recommend a visit to this beautiful landmark enough. I think that this artwork truly breathes the life and history of the area. Why not put this on your list of places to visit? You can start by walking from the Lochrin Basin canal path at Fountainbridge in Edinburgh. Your 90-minute walk will bring you to the Colinton Tunnel and the village of Colinton itself.  Or alternatively, you can do it in reverse. See the map above for directions.

Once there you can recharge your batteries at one of the inviting pubs, coffee shops or restaurants. From there just walk up to the top of the village, and take a No.10 or 16 bus back into town. The No.45 also comes through Colinton and can be picked up from the High Street, Chambers Street or Lauriston Place if travelling out from Edinburgh. If in doubt, just ask one of the locals for directions to the bus stop. They are always willing to help. Alternatively, you could make the same journey in the opposite direction.

Alternatively, you can incorporate a visit to the Colinton Tunnel on one of our local tours. For further information, go to our Tours page

If you need further information or wish to make a donation towards the maintenance and upkeep of the tunnel please go to www.colintontunnel.org.uk

Other great references related to the tunnel, the village and the surrounding area can be found at the following:

http://www.junipergreencc.org.uk/jg300-1/mills2.html  – the mills of Juniper Green