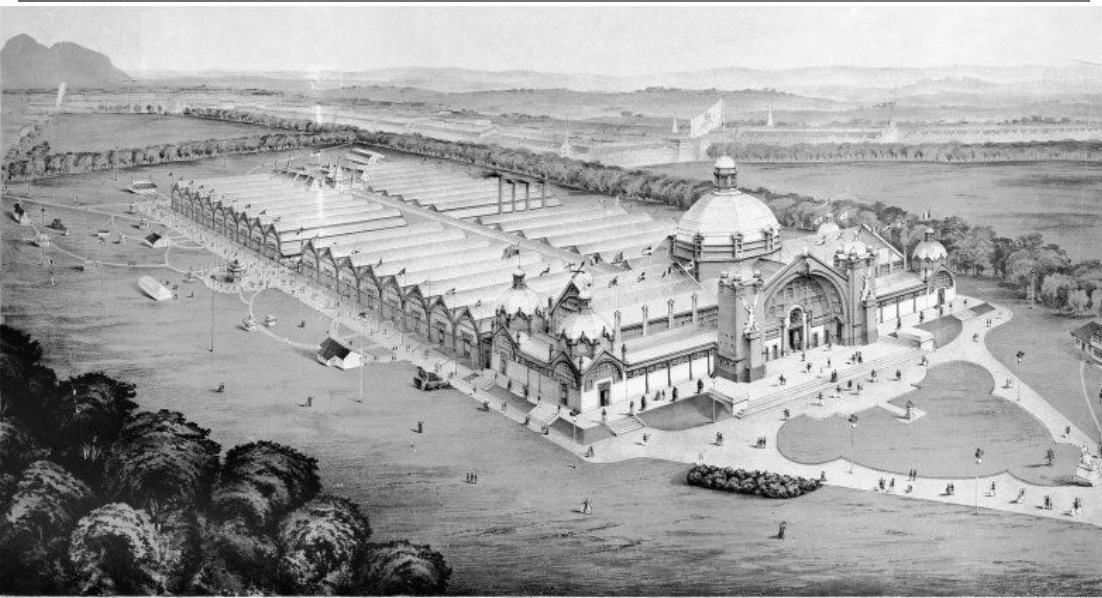 THE 1886 INTERNATIONAL EXHIBITION OF INDUSTRY, SCIENCE AND ART

The 1886 International Exhibition was officially opened by the grandson of Queen Victoria, Prince Albert, or Prince Albert Victor to give him his full title on 6 May 1886. The exhibition was held in the Meadows and it ran for 6 months and was hugely successful.

THE ERA OF INTERNATIONAL EXHIBITIONS

The International Exhibition was one of several that took place throughout the United Kingdom during the reign of Queen Victoria. The most famous of the exhibitions that took place was the Great Exhibition at the Crystal Palace in London in 1851. But many other cities around the UK seized the opportunity to create their own exhibitions and draw people from around the country as well as many from overseas.

Glasgow followed Edinburgh’s lead and produced their own International Exhibition in 1888 and 1890. The differences between the two cities and their respective exhibitions became apparent. Glasgow had experienced huge growth in manufacturing and ship building, comparable with many English industrial centres. It enabled them to put on far larger exhibitions than Edinburgh. Having seen some of the pitfalls that befell the organisers of Edinburgh’s exhibition, they were able to ensure that they didn’t make the same mistakes.

Edinburgh was already considered to be a major tourist centre with Edinburgh Castle sitting majestically over the Old Town. Nonetheless, the International Exhibition would simply be the icing on the cake for visitors to the city. Visitors would see the contrast between the old medieval town of Edinburgh, and Scotland’s future thanks to the entrepreneurs who contributed to the exhibition both financially and with their displays.

Two critical factors would play a part in securing the International Exhibition; funding and a suitable exhibition site. Were it not for the efforts of the Lord Provost of Edinburgh, Thomas Clark, the exhibition may never have taken place.  After initial ‘sour grapes’ from Glasgow City Council, both Edinburgh and Glasgow Councils contributed the largest donations to the Guarantee Fund. The rest was made up from exhibitors and investors.

There were a number of green belt or parkland areas that could have been chosen but in the end, the organisers plumped for the Meadows. For those not familiar with the Meadows, it is a 63 acre of parkland on the south side of the city. It was originally known as the Borough Loch and was formerly one of the main water supplies for the city. A piped water supply from the hills beyond Comiston in 1621 put an end to that. Then in 1722, the Borough Loch was completely drained and gradually landscaped into the park that it is today.

One important factor that initially held up the exhibition was the 1827 Act of Parliament. This Act prohibited any form of construction on the Meadows. Up until it was suggested that the exhibition should take place here, the Meadows had been used for grazing of animals, and for leisure. In fact it was here that the earliest football teams played their matches. Edinburgh’s two football teams Heart of Midlothian and Hibernian played their first Derby match on 25 December 1875.

In any case, a deputation approached the Council with a request to build a temporary exhibition at the Meadows. Possibly because the Council had already contributed funding for the exhibition, it was agreed that the Meadows could be used.

WHO WERE THE EXHIBITORS

In less than a year the building that would house the exhibition was completed in time for the official opening on 6 May 1886. The building itself was a major achievement and visitors to the exhibition were in awe at its scale. Inside there were rows and rows of exhibition space. Many of the exhibits were from all corners of the globe and for many of the visitors it opened them up to a new world.

As well as the overseas exhibitors, there were the home-grown exhibitors including industrialists, textile manufacturers, artisans, catering and restaurant owners, civil and military engineers, shipbuilders and the agricultural sector. They even transported one of the Caledonian Railway company’s steam locomotives into the building. And naturally, no exhibition would be complete without representation by the National Exhibitors of Scotch Malt Whiskies. It was a display designed to show the rest of the world just what Scotland was about.

As if to impress the visitor of the ‘Scottishness’ of this exhibition, the Grand Hall was grandeur personified. A huge statue of William Wallace took centre stage  but shared the space with other artefacts of Scottish nationalism from centuries gone by.

One part of the exhibition consisted of a compete reconstruction of Edinburgh’s Royal Mile around the area of the Netherbow Port and John Knox House. In a space 200 feet long and 65 feet wide, twenty one buildings were constructed. They were recreated in the style that would have been encountered before the Netherbow Port was demolished in 1764. They even employed reenactors to dress as the Town Guard from that period. It was an amazing spectacle.

However, what would have been most fascinating for almost all of the visitors would have been the 3,200 electric lamps which illuminated the Exhibition building and grounds. Today electricity and electric lighting are taken for granted. But for Victorian Scotland this was akin to ‘black magic.’ There was even an electric train ride that visitors could take along the northern side of the exhibition area. Who would have imagined that a concept that was first demonstrated 135 years ago, is now something that our world is quickly having to adapt to as the combustion engine is now less attractive?

There were a total of three royal visits, the most highly anticipated was by Queen Victoria herself in the August during her Summer holiday to Balmoral. Visits by other prominent dignitaries encouraged more visitors to attend. Added to this there was an ever changing programme of entertainments which meant that if visitors returned, they would most likely see something that they had not seen before.

By the time the International Exhibition came to an end on 31 October 1886, 153 days after it was officially opened, it could account for 2,769,632 visitors. That was equivalent to over 18,000 visitors a day. One of Britain’s most famous travel agents, Thomas Cook, was integral in providing packages for visitors from all over the country to come to Edinburgh.

By the time the exhibition had come to an end and after all overheads, including the dismantling of the exhibition building, a total profit of £5,600 had been made. In today’s terms that is equivalent to around £750,000. That is not really a lot. But what the exhibition did do was to put the city of Edinburgh on the global map and ensured its future as a holiday destination. This it has retained to this day.

For anyone visiting Edinburgh, the Meadows are within a 10-minute walking distance from the Old Town. On a clear sunny day it is a wonderful place to retire to for a little peace and quiet and to escape from the hordes of visitors trying to capture yet another ‘selfie.’ The tree-lined paths are stunningly beautiful as can be seen in the image above. Edinburgh Cab Tours are able to include this in any of our city tours. For further details please visit our TOURS page.